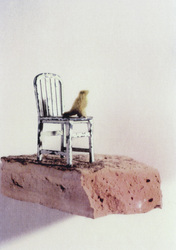 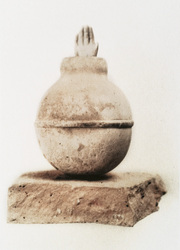 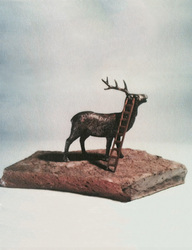 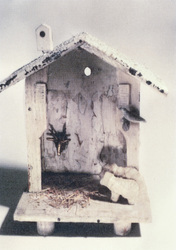 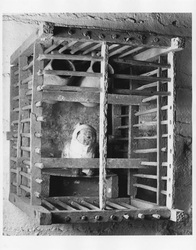 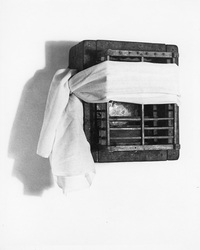 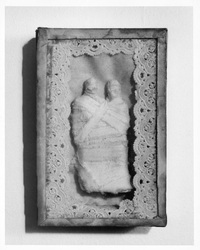 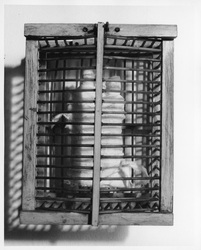 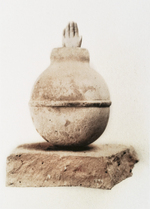 "Byars pursues art as an instrument of mystical revelation.
The artist, who is influenced by Jungian psychology, fills her work with cross-cultural reference.
Hosanna is a small work, only about seven inches high. A hand reaches out of a bulb form like a phallus emerging from an egg. The tiny sculpture becomes a fertility symbol that, though invented, seems universal. Because the hand strains
heavenward, it can also be read as a gesture of praise."
—Lynn Zelevansky
Art News, 1983 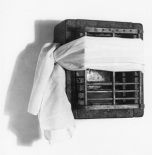 "In works such as Vested Relic, where stone and silver wings are enclosed within a blindfolded cage, creating a
secret altar and a reliquary, Byars preserves the magical objects that reveal to her the presence of the Goddess as a guardian spirit in her world. The blindfolding of the cage symbolizes that these sacred objects can only be
perceived with the inner eye."
—Gloria Feman Orenstein
Reemergence of the Archetype of the Great Goddess in Art by Contemporary Women
Heresies, Fifth Issue (Goddess Issue), 1978.
La Réémergence de la Grande Déesse dans l’Art Feminine Contemporain, Sorcières, 1980