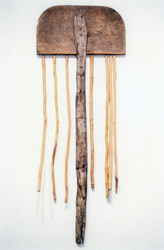 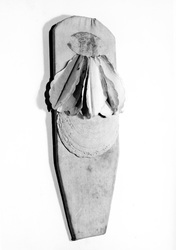 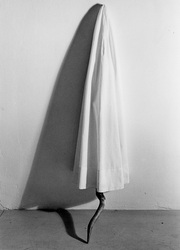 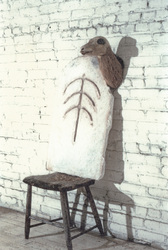 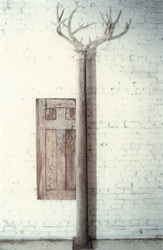 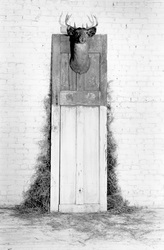 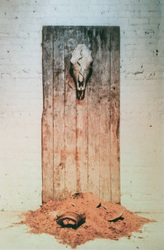 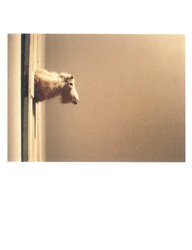 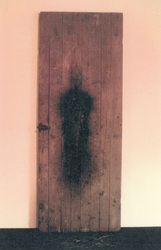 "In Winnowing Fan, she combined two well-worn, much-handled wooden artifacts with hanging wooden parts that she had made. The title evokes the ancient handwork of winnowing, the separating of the chaff from the grain. Coincidentally, the
Old English root of the work windwian means "to fan". Byars imagines the sculpture being carried, perhaps in an agrarian ritual, with the hanging pieces moving in the breeze. Like all of her work, this piece embodies the site from which it came. Just as an African mask by the power of its visage maintains its ritualistic and sacred identity out of context, so does Donna Byars' sculpture uphold the mystery of its finding and bears the marks of its history of use. As Carolee Thea has pointed out, her sculpture is characterized by the coexistence of the visible and in the invisible." [page 19]
—Rebecca Massie
The Sydney and Frances Lewis Contemporary Art Collection catalogue
Introduction and Donna Byars, VirginiaMuseum, Richmond, 1980

"This piece, as the title implies, appears to react against the revelation of the inner self. The Secret is graceful and sinuously delicate. The cloth, an antique muslin petticoat draped over a carved stick, does not succeed in inhibiting the suggestion of activity and energy which appear to be occurring underneath. One's interest and curiosity is heightened by the enclosure created by this fabric as the viewer is almost dared to peek underneath, or to pull the cloth away altogether. The viewer is left to surmise, therefore, what the petticoat covers. The use of a woman's undergarment and the phallic suggestion of the curved support hint at something sexual and provocative."
—Marcy S. Phillips and Linda Goode-Bryant
Contextures, Just Above Midtown, New York, NY 1978

"Often this material and process reference to sensuality is combined with an abstract imagery referring to parts of the body, yet simultaneously to the whole body. Louise Bourgeois' latex, marble, and plaster sculptures; Barbara Zucker's
hydrocal Huts; Amy Hamouda's fiber sculptures; Debbie Jones' carved wood receptacles; Lynda Benglis' latex, foam, and wax pieces; Sandy De Sando's plaster cakes; Donna Byars' vaginal icons of old wood fabric; Hannah Wilke's early latex and eraser works; and my own wrapped sculptures are just a few of many examples where the feeling of sensuality comes simultaneously from the materials and their manipulation and from abstract body references."
—Harmony Hammond
Heresies: A Sense of Touch, #12:SEX ISSUE, 1981

"Byars delights in the patinas, the textures, and the imperfections of the materials she works with. Yet while she may enjoy the tactile qualities of these objects, the work seems to seek to transcend its concrete reality.

Byars claims a place for Shamanism in art today, and shows that the artist can lead us away from an obsession with the contemporary to a region of often forgotten memories. Through her dream-inspired iconography, viewers become collaborators in a search for revelations which may help them live and understand."
—Patricia Phillips
Artforum, April 1985

"Donna Byars' sculptures attest to a close relationship between the artist and nature. Her works are explorations of the unconscious, of the mystical, and of the sacred, but with an eye to dailiness and an attention to the language of dreams and silence... The door becomes an entry way and a barrier between rational and irrational spaces... As in previous works, Byars transports nature into the gallery: her subtle transformations of space with light, objects, and even trees, allow the elements to retain a sense of mystery. As a result, her works assume a perfomativity that is experienced as much as observed."
—Patricia A. Simpson
Tarantella, 1997, exhibition catalogue
PS 122 Gallery. New York, NY

"Donna Byars has created many works such as The Snake, The Skull and the Pot (1992-1994), that synthesize aspects of ancient altars dedicated to animal spirits, earth forms, the Snake Goddess, and the Lady of the Beasts."
—Kay Turner